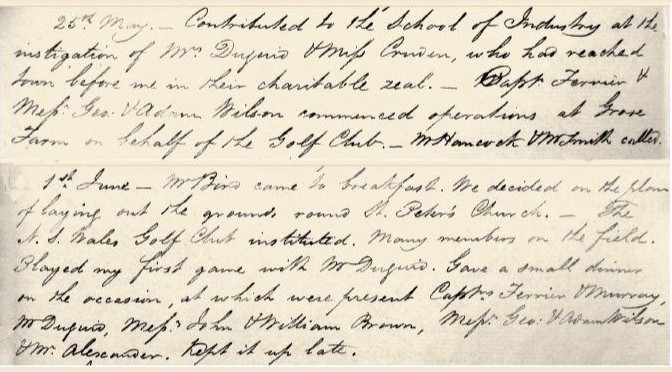 Alexander Brodie Spark was born in Elgin, Scotland, in 1792. He arrived in Sydney in 1823. As a merchant entrepreneur he became a wealthy and respected member of colonial society. He died in Sydney in 1856. Spark is important to historians because he was an
assiduous diarist and his diaries have been preserved. His diaries are important to golf historians because they give us the first reliable, stress reliable, evidence of golf being played in Australia. It was played on Grose Farm, land now occupied by Sydney University, Royal Prince Alfred Hospital and Victoria Park. The first two entries
from the 1839 diary relating to golf are reproduced here in their original form.

The Spark diaries first came to the attention of golf historians in a ground breaking article by David Innes in 1992. Innes, however, left several questions either unanswered or only partially answered. Firstly, what triggered the start of golf at Grose Farm on 25th May
1839? Secondly, why did that phase of golf and the first New South Wales Golf Club have such a short life? Thirdly, what was the connection between those early golfers and the (now Royal) Blackheath Golf Club in London? The Blackheath connection presented the greatest puzzle. Innes reported that in 1841 Spark was made an honorary member of the Blackheath Golf Club, but he made no comment on this rather surprising event.

All the evidence points to Captain James Ferrier, master of the Lady Fitzherbert, which had an extended stay in Sydney in 1839, as the most important of the three key persons. Captain Ferrier lived in Blackheath, played golf there from 1820 to shortly before his death in 1844, was a member of the Blackheath Golf Club and on occasions chaired their meetings. Golf at Grose Farm started shortly after he began his forced stay in Sydney and apparently faded after his departure. The second key figure was John Masson, Spark’s shipping agent and close friend from their youthful days in Elgin, Scotland. He was part owner of the Lady Fitzberfrert and a cousin of Captain Ferrier. He was Captain of Blackheath in
1825 and Secretary from 1827 to 1844. It was Masson, Secretary at the time, who in 1841 informed the Club of the birth of Spark’s first son and, acting for Spark, presented the Club with the customary “gallon of claret”. It was as a direct consequence of Masson’s action that Spark was made an honorary member of Blackheath. The third key figure was Adam Wilson, an associate of Spark and a member of the Blackheath Golf Club from 1828 to 1840. In 1844 he attended the Mayor of Sydney’s Fancy Dress Ball in the uniform of a
Blackheath golfer.

The research article by AGHS Members Michael Sheret and Norman
Richardson, on which the short summary above is based, was published in the March 2014 issue of Through the Green, magazine of the British Golf Collectors Society. It is a long article with a detailed reference list to sources of evidence, the bulk of which are from primary sources. For example: the original Spark Sydney diaries, his London journal, his London letters, Blackheath GC archives, papers held at the Derbyshire Records Office, ship ownership records, the wills of Captain Ferrier and his wife Frances Dick, records fromn the censuses of England. It was a very exciting research journey for the authors.